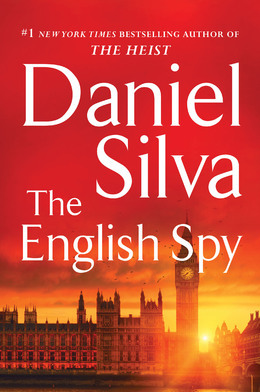 #1 New York Times bestselling author Daniel Silva delivers another stunning thriller in his latest action-packed tale of high stakes international intrigue featuring the inimitable Gabriel AllonShe is an iconic member of the British Royal Family, beloved for her beauty and charitable works, resented by her former husband and his mother, the Queen of England. But when a bomb explodes aboard her holiday yacht, British intelligence turns to one man to track down her killer: legendary spy and assassin Gabriel Allon.Gabriel’s target is Eamon Quinn, a master bomb maker and mercenary of death who sells his services to the highest bidder. Quinn is an elusive man of the shadows—“a whisper in a half-lit chapel, a loose thread at the hem of a discarded garment”—but fortunately Gabriel does not pursue him alone. At his side is Christopher Keller, a British commando turned professional assassin who knows Quinn’s murderous handiwork all too well.The English Spy moves at light speed from the glamorous island of Saint Barthelemy to the mean streets of West Belfast to a cottage atop the cliffs of Cornwall that Gabriel holds dear. And though he does not realize it, he is stalking an old enemy—a cabal of evil that wants nothing more than to see him dead. Gabriel will find it necessary to oblige them, for when a man is out for vengeance, death has its distinct advantages.Filled with breathtaking twists, The English Spy will hold readers spellbound from its riveting opening passages to its heart-stopping conclusion. It is a timely reminder that there are some men in the world who will stop at nothing to achieve their goals. And it proves once again why Daniel Silva is regarded as his generation’s finest writer of international thrillers.PRAISE FOR THE ENGLISH GIRL“Smart, unpredictable, and packed with bits of history, art, heart, and imagination, this is a page-turner to be savored. . . . When it comes to the vast club of practitioners of international spycraft, Silva is a cut above them all, and The English Girl is a masterwork.” —AMAZON.COM“Allon is a great political operative, but Silva is an even greater writer. That is what makes The English Girl a must read.” —THE HUFFINGTON POST“Although Gabriel’s adventures are set in the real world of greedy politicians and grabs for control of a diminishing supply of natural resources, ‘Israel’s avenging angel’ has the superhuman abilities that make for a satisfying fantasy.” —COLUMBUS DISPATCH