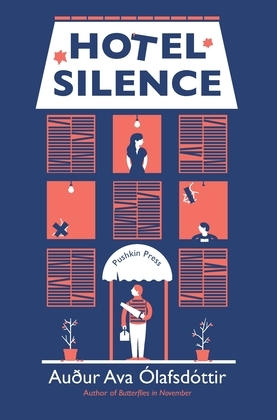 A funny, wistful and utterly beguiling novel about a man whose life is falling apart, and how he learns to put it back togetherJÓNAS FEELS LIKE HIS LIFE IS OVER.His wife has left him, his mother is slipping deeper into dementia, and his daughter is no longer who he thought. So he comes up with a foolproof plan: to buy a one-way ticket to a chaotic, war-ravaged country and put an end to it all.But on arriving at Hotel Silence, he finds his plans – and his anonymity – begin to dissolve under the foreign sun. Now there are other things that need his attention, like the crumbling hotel itself, the staff who run it, and his unusual fellow guests. And soon it becomes clear that Jónas must decide whether he really wants to leave it all behind; or give life a second chance, albeit down a must unexpected path…Auður Ava Ólafsdóttir is an Icelandic prize-winning novelist, playwright and a poet. She is the author of five novels, a collection of poetry and four plays that have been performed at the National Theatre in Iceland and at the Reykjavik City Theatre. She also writes the lyrics for the Icelandic performance pop band Milkywhale. Auður Ava’s novels have been translated into over 25 languages and among them are The Greenhouse and Butterflies in November. Her new novel, Hotel Silence, won the Icelandic Literary Prize 2016 and was chosen Best Icelandic Novel in 2016 by booksellers in Iceland. Auður Ava lives in Reykjavik.